One of the more entertaining reads surviving from this period is the Classical Dictionary of the Vulgar Tongue by Capt. Francis Grose. 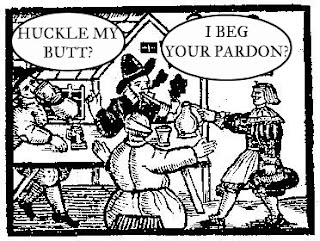 First printed in 1785, it is a curious document. Much of it seems to be cribbed from the Nathan Bailey's Canting Dictionary of 1736, a collection of thieves' and underworld slang. Controversy exists as to how many of those early terms were still in use fifty years later when Grose's book first hit the streets, but many of the terms and phrases he uses are surprisingly modern and are still in use today. And I maintain that some are long overdue for a comeback. The book can be a neat way to salt a historic impression with authentic period slang.  Below are a few entertaining examples:

Act of Parliament: A military term for small beer, five pints of which, by an act of parliament, a landlord was formerly obliged to give to each soldier gratis. [And one hopes the innkeeper would be reimbursed for his expense. The term "it would take an Act of Parliament," meaning something all but impossible, is still in use today.]

Beau-trap: A loose stone in a pavement, under which water lodges, and on being trod upon, squirts it up, to the great damage of white stockings... [One of my favorites, the Georgian equivalent of a cross-town bus on a rainy day.]

Fly-by-night: You old fly-by-night; an ancient term of reproach to an old woman, signifying that she was a witch, and alluding to the nocturnal excursions attributed to witches, who were supposed to fly abroad to their meetings, mounted on brooms. [Another one that's still with us, now meaning something shady or illegal. It seems obvious, but I have to admit, I had no idea where the term comes from.]

Heighty Toity: A hoydon or romping girl. [Elsewhere Grose defines "hoyden" and "romping" as a girl who is forward in her behavior. One can already see the transition to the modern "hoity toity," though with a very different definition to our modern one as pretentious or putting on airs.]

Huckle my butt: Beer, egg, and brandy, made hot. [OK, so I added this one just because the name made me laugh. Seriously, when was the last time you ordered this in a bar or restaurant?]

Leaky: Apt to blab; one who cannot keep a secret is said to be leaky. [I want to see this one make a comeback. I know some rather leaky people.]

Well, that's enough rigamarole for one session. I have to pad the hoof and yam, but there'll be more next time.

REGAL
The Regency, Empire, and Georgian Aficionados' League is a group of like-minded living historians who study and recreate life in Europe and America from 1720 to 1830.